A Brief History Of Funeral Directors

For as long as history has been recorded members of a society have always cared for their dead. As we travel through time from the first embalmers of Egypt, to medieval undertakers, to 19th century funerals and the rise of modern embalming during the American Civil War, explore a brief history of funeral directors from the ancient world to today.

Death and Burial in the Ancient World

Death may be universal across time, but just as every culture has formed unique social norms and found different ways of living life, they have also found different and sometimes extraordinary ways to honor their dead and cope with the effects that it has on those left behind.

In ancient Egypt special priests worked as embalmers, treating and wrapping the body of deceased royalty and nobility, spending up to 70 days preparing them for the afterlife. In Rome, wealthy Romans relied on their families to prepare and care for their remains, but professional mourners were employed to make a fuss of the deceased’s passing to signify their wealth and power.

The Origin of Undertaking

In medieval times, the word ‘undertaker’ was used vaguely for anyone undertaking a task or responsibility. The first funeral undertakers were woodworkers – typically furniture makers or carpenters – that had the skills required to make a coffin. For many early undertakers building caskets was a logical extension of their business and funeral undertaking was a second business rather than a primary profession. In more rural areas, if they had a horse and cart, they also provided transport of the deceased if it was needed but families primarily cared for their own dead until the mid 1800s.

In 19th century North America the local ‘layer out’ – typically a woman or group of women – would help with the ‘laying out of the dead’, carry out the ‘last offices’, and attend to the needs of both the bereaved and the deceased. At this time, families still prepared, dressed, and displayed their loved ones within their own home. Visitation was held in the front parlor followed by a procession where friends and family often carried the coffin in a walking funeral to the local churchyard for burial.

After a loved one’s passing an undertaker would take measurements for a bespoke coffin, made from hardwood, and sealed inside with wax and bitumen. Once the coffin had been completed the undertaker would then return to the family’s home to deliver the coffin, sometimes having to remove a window if the doorway was too narrow. Many New England farmhouses at the time even had ‘coffin windows’, built specifically for this purpose.

Beyond the practicality of these specific structural considerations, at the time, it was considered improper to remove a body through a door that the living crossed to enter. So much so that most grand American homes of the 19th century even had false, or ‘death doors’ placed off the parlor that led outside, built without steps or obstacles they provided an easy and proper means to getting the body out of the home.

The deceased, clothed in their best nightdress or Sunday suit, would then rest in the front parlor until the funeral, which was usually held three or four days after death. In the days before the funeral the undertaker would visit to check on the condition of the deceased and fragrant flowers were placed around the room to help absorb unpleasant odors.

Over time, undertakers took on more and more of the elements we consider to be an integral part of a modern funeral director’s role, from care and preparation of the body to organizing the funeral service and providing support for loved ones. 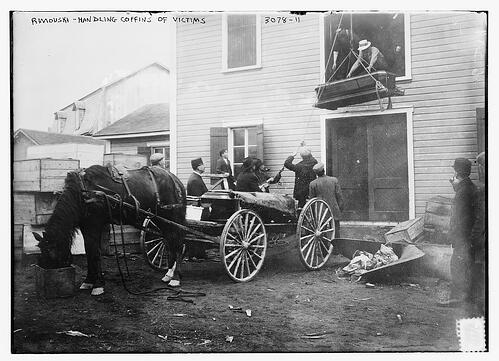 The Rise of Modern Embalming

Although embalming dates back to the ancient Egyptians, the practice of embalming became more common in the United States during the American Civil War when it became necessary to preserve the bodies of servicemen who had died far from home. After the end of the Civil War, the technique of embalming had become widely known and was beginning to be recognized by the public as an acceptable way of caring for the dead. As embalming gained favor, modern embalming was truly born when undertakers began taking on the responsibility. The skills that it required helped to turn undertaking into a real profession with demand for embalming increasing in the 1890s.

While it is not clear when the funeral director title was first used. The British Undertakers’ Association became the National Association of Funeral Directors in the early 1900s. Marking an important evolution in the funeral director role from tradesmen to professionals and reflecting the increased responsibility involved in directing every aspect of the modern funeral service far beyond the original scope of early undertakers and coffin makers.

Today, funeral directors are acknowledged for the incredibly important work they do. We have come to rely on their professional experience and knowledge to support families through one of life’s most difficult challenges.

From Our Team to Yours, Thank You

In honor of National Funeral Director and Mortician Recognition Day on March 11th, Gather would like to recognize our funeral professionals and all other last responders.

What moments in death care history would you like to learn more about? Share your thoughts below!

Jessica Short is a member of the Marketing Team at Gather. She is an experienced marketing professional with an emphasis in inbound marketing and background in analytics. What Is the Future of Live Streaming? The Benefits of Gather’s Cloud-Based Software 5 Questions About FEMA You Need Answered